It’s that time of the year – second week of October – for the Albuquerque Balloon Festival.  This event is photographic nirvana.  There is so much to shoot, close, far; different balloons – up and down; it is a cornucopia of photographic fodor. 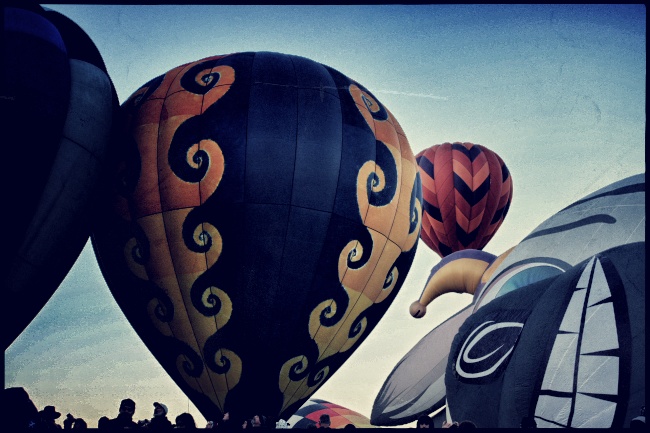 I have a dear friend going this year, so I promised to send her my post of photos from my last visit.  I had no idea it had been so long.  We were there last in 2012, before I had this blog.  Where does the time go.  So I thought I would post some of those oldies but goodies to her to give her an idea of what she’s in for.

There are so many balloons, in the air and on the ground to shoot.  Of all different colors and characters.  One can shoot up, down, or inside the many awesome balloons.  It’s a humbling and gratifying experience… and all but done by 9am.

I loved the balloon fire pix.  I was obsessed with that mechanic tool of fire.  I was a nuisance with a camera… and a kid in a candy store.  It was so much fun.

I also loved the inside balloon shots.  It was sometimes hard to get close enough to get those shots… but there are plenty of opportunities with so many balloons everywhere.  One can take creative license and get so many different creative shots.

There were also tons of animal figures, Sponge Bob, Darth Vader, and cartoon characters like Woody WoodPecker.  The variety and types seemed endless.  I found myself running from one balloon on the ground just about to going up, to others yet to go, to one’s already launched.  It was a frenzy of mad photography for a couple hours from 6am to 8am.  It was such fun.  I’m sure she’ll have an awesome time and bring back amazing pix.